Brussels is like Antwerpen but also not. It has a Paris element to it with its jaw dropping views, and what I mean by that is that each piece of architecture has been cleverly constructed so that while you might be at one of them in the distance you clearly see the other popping out in the fog which is just wonderful.

I also liked the culture, I really don’t know much about Brussels, but I honestly thought everyone would be Flemish and was completely surprised by all the French! I liked that there was this random mix of Italians, French, Flemish etc all around, it is refreshing!

On Saturday after we missed our earlier train we arrived in Brussels starving. Our hotel (which was just lovely and perfect location) was super close to Manneken Pis which ended up being our beacon and compass for the rest of the trip. We were surprised to see that he had clothes on, but later learned at the Museum of the City of Brussels that he has over 800 outfits! There is even a South African one, gumboots and all!

We made our way pass Manneken Pis to Grand Place which is similar to Antwerpen’s square. As you enter you will see a statue Everard ‘t Serclaes which almost every single person walking in touches. It is apparently for good luck.

We had lunch at Magic Rubens and then made our way to the gallery where we bought chocolates. It was a bad idea to eat everything, cause we ended up on such a sugar high that we can’t quite recall for how long we just walked around aimlessly. The come down was hard and we nursed it with a gin and tonic on our way back to the hotel. Was weird sitting across the church drinking, Europe still confuses me.

After getting a power nap in we tried to get in at an Ethiopian restaurant (yes, we went to Belgium just to try and have dinner at Ethiopian restaurant!) but it looked so good! Unfortunately you have to be a party of ten which was rather disappointing. But then we ended up in a real Italian restaurant so Italian that some of the staff did not understand English. I really really enjoyed this place. We went all out and had a cheese platter, bottle of wine and pasta!

Sunday we had our run, and went out a bit, and ended up in Brussels Park, such a beautiful morning and the park was just lovely, there is a big fountain in the middle, so peaceful. We ran zig zags through the park, and liked it so much we returned later the day just to go sit there a while.

We ran back through Mont des Arts Garden which again, just lovely! Before we left for Amsterdam we made our way back here just to take it all in. We also made our way to the Kruid tuin on your way there you will pass the Tomb of the unknown soldier who died in world war one. There is flame that burns and the architecture is amazing! Once we got to Kruidtuin, which is situated between all the modern office buildings we enjoyed a cold beer, which went down well before walking to see the Eglise Royale Sainte-Marie.

I understand why Stephan likes Brussels so much, it really is special!

Ideal location, 400meters from Manneken Pis (which we used as a beacon) and 700 meters from Grand Place 1,6 walk from Eurolines Gare du Midi (Brussels-Zuid/Midi) station

Staff is super friendly! Room is big and comfortable and luxurious. Our check in was 3pm, but they accommodated us when we arrived early and gave us a map of the city, definitely recommend this place!

Once again last minute, literally decided the Monday we were going, had we planned ahead we could have used the Thalys for the same price we paid for the Bennelux ticket we ended up purchasing and saved an hour on travelling. But oh well. Bennelux ticket with one transfer at Rotterdam, return for two people €106

Saturday: Brunch at Magic Rubens Sloooowww service Two Cheeseburgers with Chips and two beers each **€45** The restaurants all charge tourist prices which you could easily pay in Amsterdam as well. However there were take-away kebab and wrap places all over that were much cheaper selling burger and coldrink for 8euro.

Chocolates: I guess you cant go to Belgium without buying chocolates. I am not a big chocolate fan but the shops make it look sooo good we ended up buying different chocolates, coated in coconut, marzipan and marshmallow in chocolate etc. at La Belgique Gourmande in the gallery de la Reine near Grand Place. It cost us €7,65. Would recommend spoiling yourself, but bear in mind the sugar rush!

Dinner at La Caneva. We initially tried to get in at Kokob but you apparently need to be at least ten people. So we continued walking and found La Caneva. Very Very Italian. But was such a good atmosphere! We had a bottle of wine, two plates of pasta and a cheese platter for €74.

Sunday: Breakfast and Lunch We had a self service breakfast at Exki Agora, which is super cool. Everything is bio and eco friendly etc. You also get to choose and pick your own food and pay accordingly. Very healthy and super tasty and fresh! Definitely recommend you do this! We had yoghurt, fruit, muesli, coffee, cheese croissants, cold meat, juice and waters and I don’t know what else for €16,65. The hotel wanted to charge us €50 for a continental breakfast! Glad we declined. We ended up buying lunch at Exki Agora before heading back to Amsterdam, two stokbrode and water and one quinoa salad for €14,35. We also had some Waffles with strawberry and chocolate and kiwi for €11,80 near Manneken Pis. And somewhere on our way back we had ice cream (coconut which we are addicted to lately) for €5.

Wow am I glad for this run. We ended up seeing so much more of Brussels than we did on Saturday which led to more of a sightseeing day for the rest of the day. Also my favourite part about running is that we get to all the tourist sites and its almost only us, which is quite special. 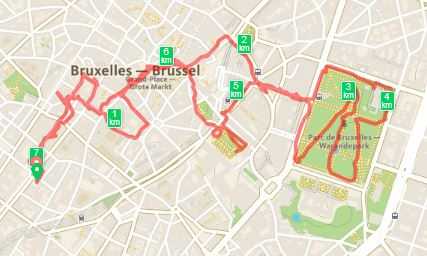